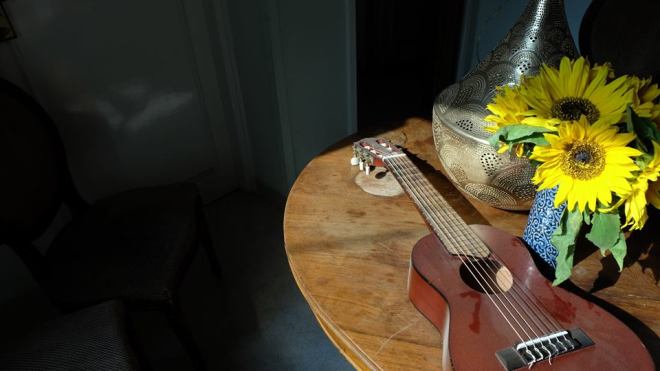 I can see clearly now the rain has gone.

The rain of late has been in the shape of one heavy, heavy and sadly unhelpful piece of professional development for the intrusive ‘real world’, which is now safely dispatched to history (so long as I get a pass).

This means I can finally return to the business of living, which to me means making music. This year hasn’t been so productive on that front, and in the last days of the last month I want to make reparations and write some songs.

So here’s the plan – over the next 31 days, from the 6th December to the 6th January, I’m going to try and write four new songs, and to chart my progress with periodic posts here on WordPress.

I’m stealing the idea wholeheartedly from one Steve Knightley. Steve’s a West Country songwriter (like me, except he’s famous) and part of the folk band Show of Hands. He’s an important figure in my musical history because Show of Hands were the first band I ever saw live (I was probably ten years old, or thereabouts), and their songs have been a part of my life ever since. Recently, Steve resolved to do the same thing I propose, and charted his progress on Youtube:

I watched every installment, and now I’m going to try and do the same.

I won’t be trying things in quite the same way. Steve rather valiantly approached his project a song at a time, writing one song per week. That’s quite committed, and I know I’m not capable of focusing all my energies on a single composition for such a short period. Nor, to be honest, do I feel that’s the best approach, at least for me.

Instead I will try and write the songs concurrently, allowing the freedom for my attention from flow from one to the other as inspiration comes and goes. That way, the songs should have the space to breathe and grow.

One rather pleasant consideration is that it’s nearly Christmas, which means a long (and long overdue) holiday. I’ll be travelling around Egypt for this time, which means I’ll leave the guitar at home in favour of the more portable guitalele. With this in mind, the guitalele is what I’ll be using to write these songs.

As an aside, Steve Knightley also used his song a week for a month as an opportunity to improve his health, forgoing sugar and alcohol during the week and upping his exercise regime. Although I’m not a drinker I certainly have a sweet tooth, so this is something I would also benefit from emulating. Let’s see how that goes.

So, this all starts properly tomorrow. I’m going to get up early, grab a guitar or a notebook, and get cracking.