The song I’ve made the most progress on so far has been Bold Little Weasel. At the Bare Bones stage, I came up with a section which feels like it’s the bridge. Then a couple of days ago, in the time it took my creaky old lift to transport me up to the sixth floor, a new blast of melody struck and I realised I also had a verse. Happily, it seems that both fit together.

I’ve spent the morning developing these ideas. Lyrics-wise, I don’t have as much as I posted for Confide in Me, but a clear picture of the structure of the song is emerging. I’ve started to tab out an emerging guitar arrangement on Guitar Pro. So far, this is sticking firmly to the basic chords and bass line, but the gaps are there to be filled in, hopefully building a more complex and interesting fingerstyle arrangement, no doubt until it’s overtaken my abilities to play. 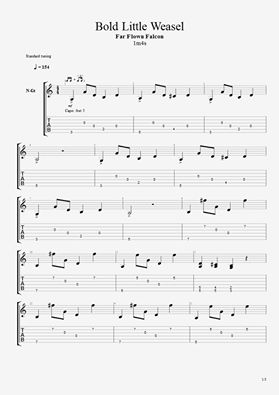 I’ve found Guitar Pro to be a very helpful songwriting tool. I can transcribe a new piece of music, and wander around the room singing to myself, putting my attention on the vocals without having to think about what your hands are doing. Equally, I can work up a solo, focusing on its melodic qualities, and then align the lead with the bass line until both are combined as a fingerstyle arrangement. For good or ill, it allows me to separate myself from my natural instinct as a guitarist. Muscle memory leads the fingers to fall into familiar patterns, but composing through Guitar Pro can to an extent become an entirely mental exercise. This makes it easier to reach new places in your composition. As I mentioned before, sometimes this leaves you with a piece that is very tricky to play – but as it’s your own song, who’s gonna play it but you? Thus, there’s a good incentive to practice and push yourself.

On the other hand, it’s impossible to replicate the attack, swing, and idiosyncrasies of an individual player on a piece of software, and it’s important to remember that this is the end goal over the automated Midi of Guitar Pro. As the composition process usually goes guitar-computer-guitar, it’s important to ensure that the living element of the first stage survives until the end. Finally, there’s just something a bit inauthentic about it – I don’t imagine my musical icons composing their masterpieces by tapping numbers into a keyboard.

As a 21st century musician I take advantage of the technology available to me. However, it would be an interesting experiment, which I’ll reserve for some point in the future, to return to writing wholly in the organic form – notebook, guitar and mind.