I haven’t quite held true to my September promise of a blog post a week, but I’m happy enough with the renewed vigour I’ve been throwing towards my music. Five Legged Holy Cow is a new composition I’ve been tinkering with since June, since (as the lyrics suggest) I spent a month travelling in India. It was supposed to be a quickly written song, with a video I was hoping to make in India itself, but songs don’t obey your wishes, and while the bulk of the song came together on the subcontinent, a little more time was needed for it to find its final shape.

This is an odd song, and you’d be forgiven if it was a little lost on you. Permit me to explain. The song’s inspiration comes from a strange sight I saw in India. A gaily coloured, gaudily-decorated, auto-rickshaw (or tuk-tuk, as they’re called in many places around the world), crammed full with a family, and squeezed between, a calf. I asked my driver what the story was, and he explained: the calf had six legs, and was considered especially blessed with powers of healing to anyone who lays their hands upon this literal ‘holy cow’. The lucky family to whom this aberration had been delivered would have given up their farm and embraced a nomadic existence, knowing they could make better money touring their lucky calf around the local communities and charging people a small fee to touch their magic beast.

As we overtook the rickshaw, I could see no evidence of the calf’s extra limbs, but the story was too good to shed doubt upon it. Before the tuk-tuk had even disappeared in the rear-view mirror, I was writing the song.

Now a six-legged holy cow just seems plain impossible, so the first liberty taken by my song was to reduce the appendages to five. Five just sings better than six, and odd numbers hold more magic than even ones. My song also needed a protagonist, and considering the animal’s curative properties, this character would clearly be someone seeking out some healing. Another easy choice was to explore England’s dark history with India. So soon I had the idea of a deserter of Her Majesty’s Service, disabled in the course of keeping the Crown’s iron grip on its colonies, now disillusioned and willing to embrace any cure for his injuries, however outlandish.

This story was heavily influenced by the Sherlock Holmes tale “The Adventure of the Crooked Man”, in which Holmes is pitted against one Henry Wood, also a soldier, and one whose experience in the Indian Mutiny left him much the worse for wear. I always love to pepper my lyrics with some unlikely words and phrases, and in the case of Five-Legged Holy Cow I was seeking vocabulary that evoked the era in which the song was set, so I snatched several choice turns of phrase from Sir Arthur Conan Doyle and dropped them into my song. These included “claiming the King’s shilling”, “a roaring lad” as well as a “bag of tigers”. Another lyrical influence was from George Harrison, whose music I always associate with India and whose album All Things Must Pass is a particular favourite. If you know that album, see if you can catch another stolen line.

Five-Legged Holy Cow is one of several songs composed recently in DADGAD tuning, which is often associated with ‘Eastern-sounding’ music. Think Led Zeppelin’s Kashmir, or Davey Graham’s magnificent Blue Raga. I kept my guitalele in DADGAD throughout my Indian sojourn, and there were plenty of long train journeys during which to noodle around and find fresh sounds. A Bill Withers acoustic funk groove turned out to be a surprisingly successful match for the open tuning. I spent a long-time sitting with that groove, knowing I liked it but feeling the song could be expanded somehow. I hit upon the idea of adding a bridge in 5/4 time; a musical challenge for me as I rarely compose outside of 4/4 and a chance to change up the vibe midway through the tune. Somehow though, this section morphed into 6/8 without me really noticing, and so it remained.

By the time I finally got the song together fully, India was far behind and I found myself back in 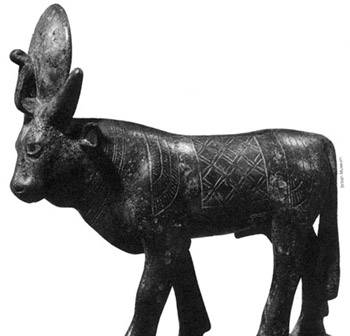 Egypt. I couldn’t find a holy cow to record with, but I did get to co-star with two delightfully calm and affectionate water buffaloes in Al Sorat farm in Saqqara. This, incidentally, is not far from the Serapeum of Saqqara, where the Pharaohs mummified and entombed their own holy cows; the Apis Bulls, which were conceived by the touch of rays beaming down directly from Heaven, and marked with ankh upon the forehead, the shape of a vulture’s wing upon the back, a crescent moon on the flank, a scarab mark upon the tongue, and bearing the sun between the horns. A tale probably worth writing an entirely new song for . . .

But in the meantime, here are the lyrics for this one:

From Africa to India, the Queen’s shilling I did claim

‘Til the misfiring of a musket, left me broke and maimed

Isn’t it a pity, ain’t it a Goddamned crying shame

What hopes he had

I’m open, my shield cast down

Luminous, what can you reveal

Liberate this soul from the spinning wheel

The heart within this hollow could be healed

Let the scholars talk of quackery and dismiss these conjuring tricks

For I live in the land of miracles, where the cripples heal the sick

Every point of the compass, every unlikely, outside chance

Through sand and sleet

To where the dead get up to dance

So raise up your lantern and limp through the dark

To where a many-faced goddess has laid down her mark

The man in ascendance, while the beast just gets worse

The man in ascendance, while the beast just gets worse

I’m open, my shield cast down

Luminous, what can you reveal

Liberate this soul from the spinning wheel

The heart within this hollow could be healed

A month ago I mentioned a musical reset, and the importance of goal setting. My big musical goal for the next year is to try and write, record and produce two new EPs of original songs. This is the start of the journey, and here I want to set out my vision of the form these two works will take. At this point, they are quite unsullied by the inevitable compromises, upsets and detours that lie ahead. By blogging their development from an intangible dream to a finished piece of art I hope to motivate myself to push on with their creation, shed some light on the creative process, and record their evolution.

What follows is a brief outline of my vision for each EP. They share some qualities:

This recording will be, for want of a better term, the more professional sounding of the pair. I intend to record it in a studio, with a small cadre of professional musicians, and basically try and create the best work possible on a limited budget. The central theme of the album will be exploring how beings of wild places, be they human or animal, survive in the unnatural confines of the city … and particularly a city as overwhelming as Cairo. Musically I hope to touch upon some features of Egyptian music. Some characteristics might be:

Confide in Me EP

This is the lo-fi record. For far too long I’ve been resolving I would start learning the craft of getting my songs down on tape. With this project I want to finally start taking steps in that direction. With that in mind it will necessarily be a simpler, shoddier affair, as I learn on the job. What I’m hoping though is for a finished product good enough to have some wonky charm. Its characteristics might be;

On this blog I’ll be jumping between the two projects, aiming for at least a post on each every month, documenting each important chapter in this tale of two EPs.

A Tale of Two EPs